When people have stuffed animals that may be worth money, they don’t necessarily want their little ones playing with them, undressing or dressing them or brushing their fur or hair. While this may seem like fun to the child, it could be doing irrevocable harm to the plush toy and in the world of antiquities, the better the item’s condition, usually the more valuable it is.

A woman in Western New York recently reported a case in which her aunt had given the woman’s six year-old daughter an old teddy bear that belonged to the aunt in her youth. Kept in storage and still in good condition, the young child was eager to play with the plush toy and make it a part of her own collection. 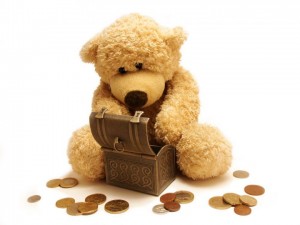 The mother relished watching her daughter play with the bear and was happy to tell her aunt that the bear had become a part of the child’s regular play things. But all that changed when the child’s grandmother, the sister of the aunt, saw the child playing with the stuffed bear and panicked. She recognized the bear as an antique, a Steiff to be exact. The German stuffed animal company, founded in 1880, is known for its production of high-quality stuffed animals.

The grandmother was able to identify the Steiff bear based on the silver colored metal button on the left ear of the bear. It featured raised script that read “Steiff.” Knowing that she had quite the find in her hands, the grandmother did her best to pacify the child with the promise of the purchase of a new stuffed animal. She took her find to an appraiser who estimated the bear’s worth to be somewhere in the thousands of dollars.

In the end, the grandmother was able to procure the stuffed animal and keep it in safe place, where it could continue to appreciate without sustaining any damage. She didn’t want to sell the toy out from under the child to whom the bear was given, but she also wanted to keep it nice until the child was grown and able to understand the true value of the bear.

It’s not every day you find a treasure such as a Steiff stuffed animal. But if it ever happens, have it appraised by a professional antiques appraiser, specifically one who deals with antique toys, dolls and stuffed animals. This way, you’ll know whether or not your child’s play things could bring more money than you imagined.