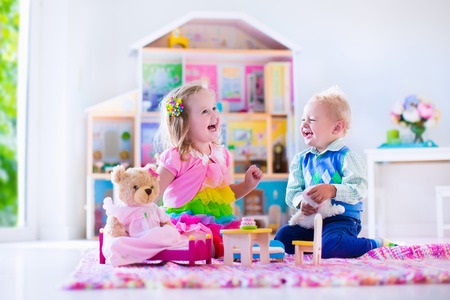 Children have amazing imaginations and their ability to play pretend and think up stories is inspiring. For many children, role-playing and creativity is often sparked through play.

Playing with different types of toys can help to fuel a child’s imagination, helping them to become more innovative and imaginative.

When children play dress-up, their imaginations run wild! When playing dress-up, children can take ordinary clothes and turn them into fantastical stories. Playing with costumes allow children to dress up as superheroes, historical figures, doctors, movie stars, animals, and more. Playing with costumes allow children to “become someone else” in a matter of minutes, resulting in endless hours of fun. Save some of your old clothing, such as shoes, purses, and ties, that could work perfectly for a costume!

Give a child (washable) colorful markers and watch them create new worlds and amazing ideas. Playing with art supplies trigger a child’s imagination allowing them to put their thoughts and dreams into something real and tangible. Art is the perfect platform for allowing children to explore their personal creativity. Children just love to get messy with glitter, glue, stickers, and paints! Here are some tips on an easy clean up!

The concept of traveling to new and unseen places can heat up a child’s imagination. Children relate vehicles with trips to school, to the park, to grandma’s house, to the beach, and more. Children love going places and experiencing new things and they often associate cars with that concept. Playing with toy cars, buses, and trains give children the opportunity to take trips in their minds. 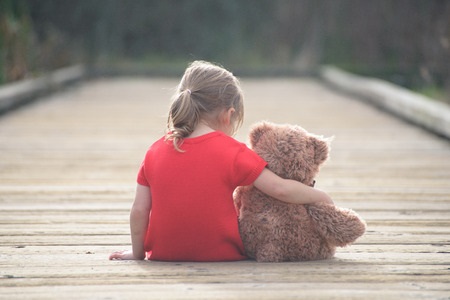 Across the United States, teddy bear events are popping up, fueling children’s educations and allowing them to use their imagination!

From healthcare events to educational events, teddy bears are playing a role in many learning opportunities for children.

Below is a highlight of some of our favorite teddy bear events from across the United States that we’ve spotted so far.

We’ve talked about these types of teddy bear events before, but there is no better place to learn how to care for your best bear friend. After all, zookeepers are experts when it comes to animals! One popular event that many zoo’s offer are Teddy Bear Clinics which encourage children to bring their teddy bear along to explore how to care for their bear and introduce them to the world of medicine.

At the Beardsley Zoo in Connecticut, children and parents enjoyed a “Teddy Bear Fest” that centered on raising awareness of bears and wildlife.  The day was packed full of crafts, storytelling, and educational facts on bear awareness. Plus, children under 12 that brought any plush toy (not just teddys!) and was accompanied by a paying adult got in free!

If you’ve ever wondered what the zoo is like once the lights go out, those that attended Family Wild Nights at Fort Wayne’s Children Zoo got to find out. This event allows children to take part in educational activities and delicious food while sleeping over at the zoo!  2019 registration is now open.  Pitch your own tent under the stars and learn about nocturnal critters or sleep under the sharks. Most importantly, don’t forget to bring your teddy bear!

Save $10 on “Teddy Bear Day” at the Cheyenne Mountain Zoo when you bring a plush friend! Meet some of the zoo’s hands-on outreach animals, get your teddy bear a check-up, enjoy a giraffe feeding and more! This event will next occur on Saturday, Aug. 17, 2019. Save the date!

In need of a teddy bear or plush friend to adventure with this summer? Make your own stuffed animal with Stuffable Animal Kits from The Zoo Factory, LLC. We have dozens of fun and soft animals to choose from, teddy bears included.