If you have recently watched television, you have likely seen a commercial with two adorable teddy bears dressed as an elderly couple that are strolling hand in hand through a bustling airport. The teddy bear commercial was recently released and has already taken the world by storm.

Whether you are the one traveling or you are waiting for someone to travel to you, traveling is a huge part of the holiday season.

We all look forward to seeing our loved ones during the holiday season and this commercial uses that feeling to their advantage.

The commercial is titled “Coming Home for Christmas” and was distributed by London’s Heathrow Airport. It was the first Christmas commercial that airport has ever put out and it was certainly successful. The ad was filmed at the airport over the course of three days while the airport was operating.

The commercial, regardless of it being just a minute long, has received over three million views.

It is sweet, warm, and fuzzy, similar to the adorable bears that we follow throughout it.

We watch the bears get off of their airplane, get their passports checked, conquer an escalator together, and struggle reaching their baggage. They are portrayed as a well-dressed older couple, supporting one another in the attempt to travel without issues. The ending is guaranteed to pull on your heart strings.

Check out the commercial below:

Jonathon Coen, the commercial’s director spoke on the commercial saying, “We love the film and hope the bears’ journey through the airport captures that excitement you feel when walking through Heathrow arrivals into the arms of your loved ones at Christmas.”

We think the commercial is adorable and we can see why it has gotten international attention, cute teddy bears usually do.

If you are looking to give a teddy bear as a gift this holiday season, visit The Zoo Factory.

If you have recently visited the cardiac unit of a hospital, you have likely seen teddy bears sitting beside patients on their bed and walking hand in hand with surgeons. Many hospitals have rooms full of teddy bears for patients that get cardiac operations, such as open heart surgery.

The patients are given these teddy bears as a part of their recovery process. These bears are extremely firm and relatively heavy, serving a very important purpose. The bears are used as a chest brace for the patients.

After an operation, cardiac patients struggle with severe pain from their stitches. Whe 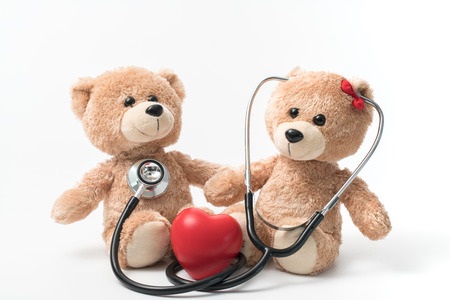 n patients need to cough, sneeze, or laugh, they hug the bear against their chest. Patients struggle after surgery to open the air sacs at the bottom of their lungs which causes frequent and painful coughing spells. Pressing the teddy bear against their chest eases the pain and holds the stitches in place. Patients keep the bear at their side throughout their hospital stay and the bear eventually goes home with the patient, serving as a keepsake for the patient.

The bears do not shed which ensures the cleanliness of the stitches. The bears are also a full-sized teddy bear which allows patients the ability to easily grab a hold of it and find it. It can easily be found when a patient is lying in bed. If the bear falls out of bed, it can be easily grabbed by an arm or a leg. Many hospitals used to use towels or pillows as a brace which were not as effective and not as cute!

These bears also become a companion for the patients. After a week or so in the hospital, patients get lonely, itching to go home to their family. These bears provide some company for patients, but most importantly, help them heal appropriately and comfortably. If someone you know just had a major operation, consider getting their cardiac bear a friend from The Zoo Factory.