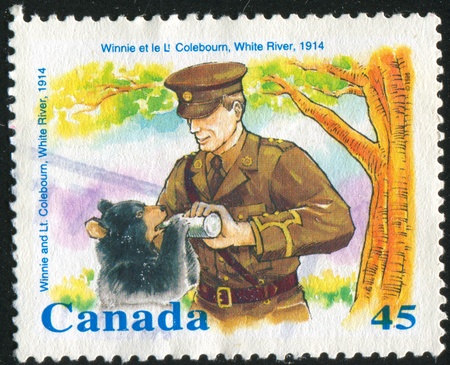 Harry Colebourn was a veterinarian tending horses in the First World War. He was on his way to Quebec to join his fellow soldiers heading overseas when, while waiting for his train, he came across a young bear cub for sale. Buying the cub for a grand total of $20, Colebourn named it “Winnipeg Bear” after the town he grew up in—although most just called the cub “Winnie” for short. Winnie went with Colebourn to Quebec, and later to England where Colebourn was stationed.

Upon arrival in England, Winnie soon fell-in with the rest of Colebourn’s troop, the 2nd Canadian Infantry Brigade. She became the mascot for the brigade, and soldiers often played with her whenever they had downtime. However, when word came that the brigade was heading to France, Colebourn was ordered not to bring Winnie with them. As such, Colebourn loaned Winnie to the London Zoo.

Winnie became a popular animal at the London Zoo. She was so tame that children would ride on her back and feed her sweets. This was where the young Christopher Robin and his father, A. A. Milne, first met Winnie. They soon became frequent visitors, and Robin named his own teddy bear after Winnie, combining it with the name of a friend’s pet swan, Pooh, to come up with the name Winnie the Pooh. Inspired, A. A. Milne would publish Winnie-the-Pooh in 1926, basing the character off of his son’s teddy bear.

Teddy bears, and other stuffed animals, are wonderful sources of inspiration, both for you and your child. Get yours today at The Zoo Factory. We have plenty of stuffable animals for you to choose from! 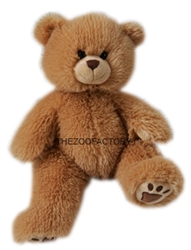 Morris Michtom might not have foreseen his invention of stuffed bears becoming a staple for our childhood, but he knew this was a great idea. Placing two bears in his store window, his toy store quickly hosted a plethora of interested customers. Mitchtom requested permission from Theodore Roosevelt to call the bears “Teddy’s bears”, as “Teddy” was Roosevelt’s nickname. It’s rumored that Michtom wanted to remind people of Roosevelt’s compassion, specifically the day he decided shooting an unconscious bear (tied to a tree) was unsportsman like; he put the bear out of misery peacefully. This act gained a lot of love and respect from Americans. Now, any story that starts like that is one worth telling.

The first teddy bear went on sale in 1903, but there’s so much more to this companion than dates and facts. The teddy bear becomes special when we add our own personal experiences in with its own rich history. As the first of two Teddy Bears resides at the National Museum of American History, encourage your child to keep his or her teddy when done with it, and explain why. It may already be family tradition to pass down a Teddy, but if not, you can start now. Whatever bear style you choose, just remember to love it, and the rest will come naturally. When you pass it on to children and grandchildren, their friendship with it will fill you with an amount of love you didn’t even know existed. One of the best parts of becoming a parent is sharing with your kids, the things you loved as a child.

Teddy bears bring magic and joy to a child’s life, which is why they’re so timeless and so priceless. The arts have used teddy bears to help tell convey childhood and immaturity in movies, TV, and books. Teddy bears can also help send a happy, positive message.

Lancelot – Labyrinth 1986, starving David Bowie and Jennifer Connelly, told the story of a young girl venturing into womanhood. In the beginning of the movie Sarah (Jennifer) has childish toys, and she believes in fantasy, and magic, giving into a childish need to escape. She was infuriated with her baby brother Toby, who stole Lancelot, her favorite teddy bear. So she unreasonably freaked out and wished him away. The bear symbolizes her immaturity, while the journey to return home represents a journey into adulthood. Subsequently, she learns to let go of the bear and learn her mistake. By the end, she relinquishes her bear to Toby, because she realizes she no longer needs it.

Winnie the Pooh – Pooh bear made his first appearance in 1926, in a collection of stories by A.A.  Milne. Eventually, Disney adopted the series, adding new characters and turning it into a phenomenon. Stuffed animals in the style of E.H. Shepard’s version of Pooh have become popular over the years. Winnie the Pooh sends a strong message of love and family, as all of the characters, including Christopher Robin, are important to the author in real life.

Corduroy – Corduroy bear is the story of a stuffed teddy bear in a department store. After closing time, he’d search to find his button, and find a home. A little girl purchased Corduroy and repaired his button. Eventually he learned that with the little girl, he had a home, and a true friend.