Teddy bears and toy stuffed animals are usually our first fuzzy friends. We are given them as toys when we are small and they bring children comfort, joy and a cuddle buddy. But can stuffed animals be more than just playthings?

According to a study done by the UV University of Amsterdam, people with depression, anxiety and low self-esteem may benefit by owning a teddy bear or two to cuddle with. 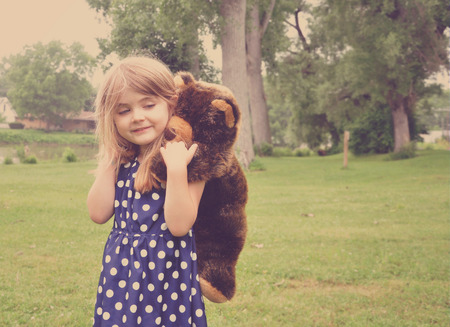 Sander Koole, a lead researcher from the university, reported cuddling with a teddy bear for example can soothe existential fears and can give some sense of existential significance.

It’s not just UV University of Amsterdam that believes teddy bears can help those feeling extra down. A researcher at Boise State University has been doing research among those with dissociative identity disorder and teddy bears. Rose M. Barlow of the Department of Psychology at Boise State wanted to see if stuffed animals would serve clients equally as well as live animals.

The idea of using stuffed animals to cure depression is not new. Stuffed dogs, cats and teddy bears have been given to children during wartime around the world.

Tel Aviv University has been using stuffed animals on children from war-torn countries with post-traumatic stress disorder to help them cope. Some children started to express themselves through the stuffed animals, which helped their teachers and parents provide better care for them. A study based on parents’ testimonies showed that 83 percent of the children suffered from stress, separation fears, aggression, excessive crying, nightmares and other issues.

Just three weeks after receiving the stuffed dogs, children showed improvement. Two month later, 71 percent had lost their severe stress reactions. This is twice as many as the children who didn’t have stuffed dogs.

A stuffed animal can bring comfort and joy to those who might need a friend but are still wary of stepping out into the world and meeting someone new. Just having something soft to cuddle with can help create a safe space for those who need a little extra help.

So what do you think?

Could it be possible that a child’s favorite stuffed animal can help him from feeling depressed or anxious? If nothing else, we know that the bond our sons and daughters can form with these fuzzy friends can be tough to break! Let us know what you think about these studies in the comments section below!

Can you believe it? National Teddy Bear Day is upon us, and The Zoo Factory team is ready to celebrate!

Join in on the fun this Friday, September 9, 2016 as everyone’s cute and snuggly childhood best friend finally gets the attention they deserve!

Think back. As a child, we all had a snuggly teddy bear we would squeeze tight when we got scared, fell asleep with at night, and that may have even joined us at the dinner table in its own special seat. At the time, your teddy bear was your best friend – by your side every day.

Wouldn’t it be nice to allow your son or daughter to make the same wonderful memories with their very own teddy?

We know that a ton of parents choose to simply pass down teddy bears to their younger children once the older ones seemingly grow out of using them as a security blanket. Before doing this, however, consider a couple of things.

Firstly, many children (though they might not want to admit it) still feel an emotional sense of ownership over their teddy bears even when they get older and depend on them less and less. With so many of their other things quickly becoming hand-me-downs, it’s nice to know that one thing will always remain theirs. On the other side of the coin, a younger child who may be on the receiving end of all things previously-loved may also crave something that is uniquely their own. You may not be able to give them their own room, but their own teddy is a great compromise in our book!

So why not celebrate National Teddy Bear Day with a brand new companion for your son or daughter? We’ll give you an even better excuse: we’re having a weekend flash sale on all teddy bears!

From Friday, September 9 until Sunday, September 11, 2016, enjoy 15% off all teddy bears at The Zoo Factory using the coupon code TEDDY16